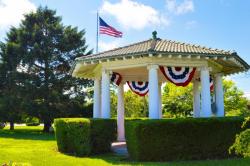 The Incorporated Village of Brightwaters is a tract of land nestled within the Hamlet of Bay Shore, within the Town of Islip, Suffolk County. With 1,183 parcels and approximately 3,300 residents, it is home to many families, some of which have roots going back generations and some who found the Village to be the perfect place to raise a family.

Recreational opportunities abound within the Village with Walker Beach, Gilbert Park, Wohseepee Park and several other parks throughout the Village. There is a boat canal leading to the Great South Bay with slips available for rent for Village and non-Village residents.

There are restaurants, a bakery, and a variety of storefront services located at the "four corners" which is known as our downtown district.  Recently, revitalized with new sidewalks, pavers and decorative lamposts.  This area continues to thrive.

Not far from Windsor Avenue in the Village on Montauk Highway (Main Street) in Bay Shore, there are many restaurants and the Boulton Center for performing arts, as well as the Great South Bay YMCA. Shopping is close by with the South Shore Mall and several grocery stores.

From the Long Island Forum, November 1962, written by Douglas Tuomey:

"In 1701 when nine native American chiefs sold a large tract of land bordering on Great South Bay to John Mowbray, they certainly never dreamed that the most picturesque and naturally beautiful section of it would become a model of community planning and development.

The name "Brightwaters" was derived from the Indian name "Wohseepee" which means the place of bright waters, and it was so called because of the chain of lakes, all spring-fed and offering clear, cold water, which the local tribes used for drinking and cooking. Today the border of the lakes are lined with spacious and beautiful homes, where once the tee-pees of deer skin stood."

"The Secatogue Indians called it Manetuck Neck, which means Pine Swamps and that name describes the mile wide, eight mile long strip of land that stretched from the Great South Bay, to half way across Long Island in 1700.

While legend tells that the Indian name for Brightwaters was "Wohseepee", research returns to the name to the name of Maetcu. An early landowner, Charles E. Phelps, had a daughter, Maude, who, on seeing the sparkling ponds said "this beautiful spot should be call Brightwaters" and so the Village has been named since the year 1880.

An Indian path that was about one mile North of the Bay became the first road in the Village, was covered in oyster shells and by an act of the State Assembly, in 1773, was called South Country Road. George Washington traveled over this road by coach when he made his 1790 tour. The road is also called Merrick Road or Montauk Highway.

On July 7, 1907 Thomas Benton Ackerson of Brooklyn, New York, purchased the property which extended from the Great South Bay to the South Fire Road. Many homes were built, roads developed and as a major project, a yacht canal and harbor were completed. The ponds were reconstructed with paths, bridges, swans and flower filled urns. The lakes were named Lower and Upper Cascade, Lagoon Lake, Mirrror Lake and Nosrekca Lake (Ackerson spelled backward).

Until 1916, the Village was under the jurisdiction of Islip Town. In that year the residents held a meeting at the Brightwaters Casino and signed a petition for the incorporation of the Village, "as they had long tired of paying private subscription to accomplish what Town taxes ought to guarantee". The petition was presented to the Town of Islip on September 20, 1916 and on November 30, 1916, Charles Suydam, Jr., Town Clerk of Islip announced that the Village of Brightwaters was a legally incorporated Village."